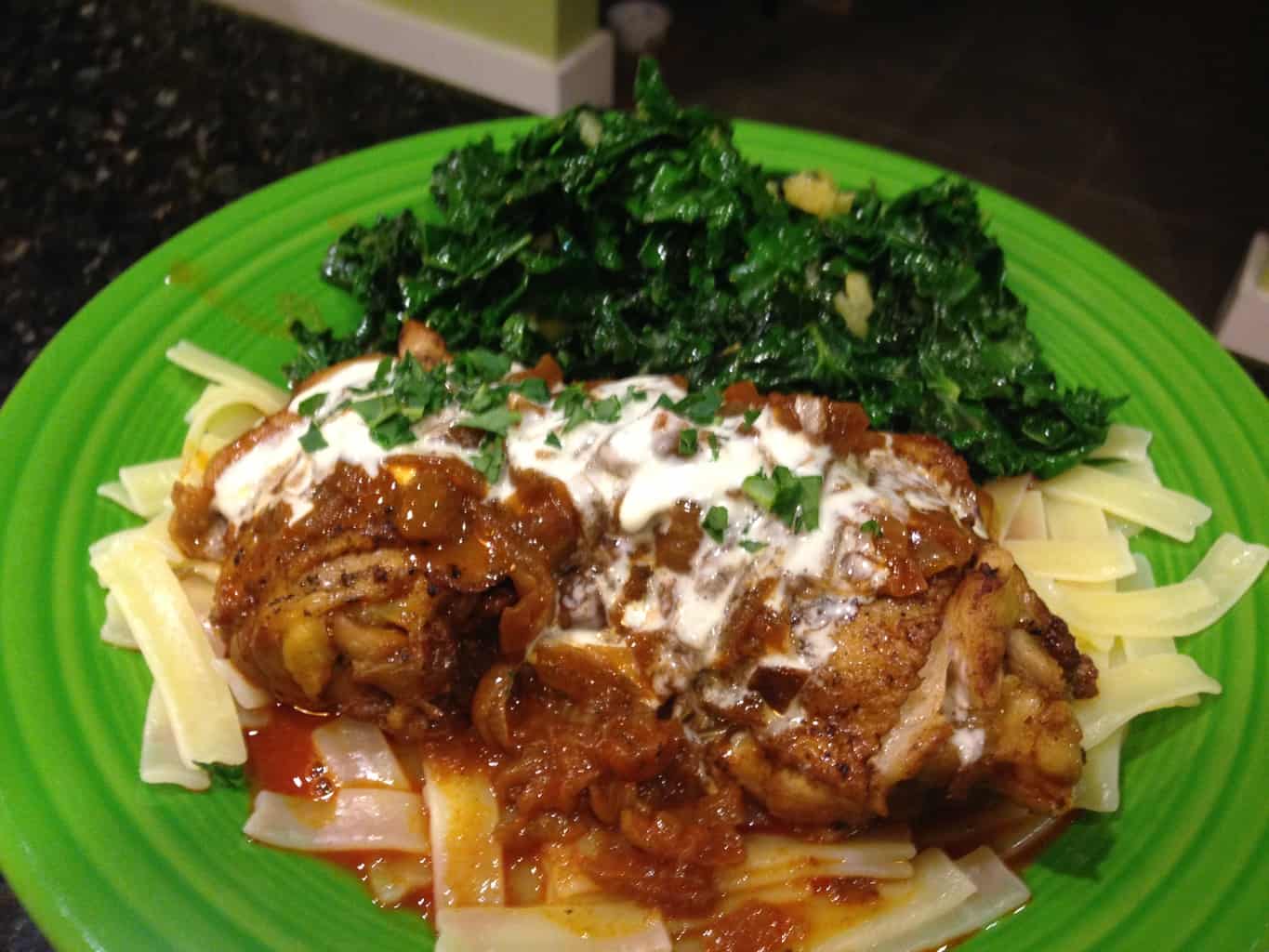 When a friend hosted a potluck, another friend and I met at happy hour for the sole purpose of hashing out what dishes we would bring to the party. This made perfect sense to us. I was inclined toward chili, particularly since the weekend promised to be on the cool side.

My friend, however, wanted to make traditional goulash — a naturally gluten-free dish. As she described her plans, including making the dish the day before for maximum flavor, I had the most intense craving for the smoky, sweet, addictive dish. While I knew my chili would be excellent, I planned to, well, camp out by her goulash and eat until I burst.

Then disaster struck, and my friend had to change her weekend plans. No goulash from her. Life would go on, and my craving for goulash would remain just that. Except, except, except…

I’d planned to make a chicken chili to balance her beef goulash. I had a boatload of onions — and this dish requires a lot of onion — plus, well, I just happened to have sour cream and lots of paprika in the house. It didn’t take long before my chili morphed into chicken paprikash, a relative of goulash.

The secret to goulash, chicken paprikash, and so many other dishes is braising. Braising uses a combination of moist and dry heat to make delicious foods. The technique is pretty simple: brown your choice of meat in a hot Dutch oven or other suitable dish; saute vegetables as a base for your sauce; add liquid such as stock, scrape up the brown bits in the pan, and get the liquid hot; finally, nestle the browned meat on top of the veggies and liquid and cook, on the stovetop or in the oven, low and slow for a good long time.

Needless to say, braising is a great choice for tough cuts of meat. The long cooking process breaks down the tough connective tissues in the meat, resulting in fork-tender meats. Braising is also perfect for dishes you make in your crockpot. The long, slow cooking process is perfect for party dishes. While the dish is cooking, you’re enjoying your guests.

When you’re ready to serve, just reduce the liquid into a sauce, and, voila!, dinner.

Traditional Western braises usually call for stock/broth or wine as the braising liquid. If you want to mix it up or try new flavor ideas, use gluten-free beer, cider, orange juice, or vinegar to add additional flavor to your dish. I particularly love adding orange juice when I’m making Caribbean dishes.

Since I’m half Hungarian, I’d like to pretend that I’ve been making this dish since birth. The truth is I’ve only been making it for a few years. While you can make it spicy with the addition of cayenne or hot paprika, I like the way the onions and paprika mellow into a slightly sweet and smoky dish.