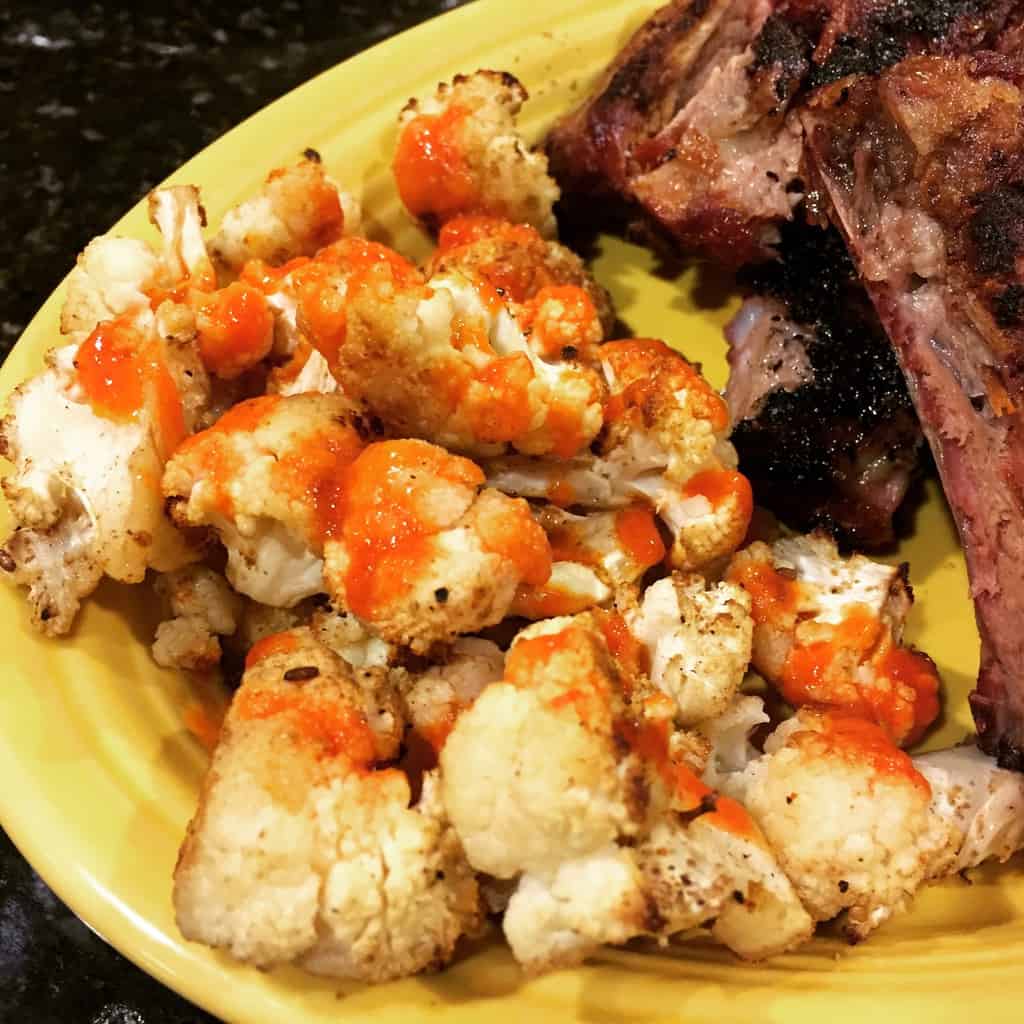 It’s no secret that cauliflower has finally attained favorite veggie status in many households, mine included. After my success with Brussels sprouts, a food my husband eats like candy when I make it, I decided to give cauliflower another try.

Way back in the day, when I was a devotee of the so-called Mediterranean diet, I’d substituted cauliflower for potatoes to make, well, faux mashed potatoes. They weren’t the worst thing in the world, but I didn’t embrace the recipe. Probably because the recipe I tried was on the bland side. I’ve bookmarked this recipe for mashed cauliflower the next time I’m ready to try this idea again. The only thing I would add is some roasted garlic.

Recently, I made cauliflower steaks — basically thick slices of cauliflower, roasted and seasoned. This is a simple, delicious recipe, particularly if you’re looking for a vegetarian main course that really stands out. Basically, roast 3/4-inch center slices of cauliflower brushed with olive oil, salt, and pepper (the outer edges of the cauliflower head tend to crumble; use them for something else) at 450 degrees for about a half hour, flipping once. You want the cauliflower nice and caramelized.

Then…top the cauliflower with a great sauce. This chimichurri cauliflower steak sounds perfect. As does this gorgeously colored cauliflower steak with ginger, tumeric, and cumin. Or drizzle the steaks with a lemon-herb sauce. Or, well, you get the picture (I’m particularly fond of the roasted red pepper sauce made by one of my local markets; this recipe comes close to the same thing. A gluten-free Romesco sauce works as well).

I did try to make cauliflower pizza crust, and it was a…disaster. Okay, maybe not a disaster-disaster, but it was disappointing. The recipe I tried was too eggy, obscuring the taste of the cauliflower. I haven’t found a great recipe for this type of pizza crust yet, but if you know of one….

Finally, there’s the simplest, easiest, most tasty way I’ve found to make weeknight cauliflower. Seriously, it’s dead simple. Cut the cauliflower into florets and toss with a bit of olive oil, salt, and pepper. Spread on a roasting pan and roast at 450 for about thirty minutes. Make everything else while the cauliflower roasts. You want to stir the cauliflower about halfway through the roasting, and the goal is caramelized, brown, and cooked through.

Then drizzle the cauliflower with Frank’s Red Hot Sauce mixed with butter (not a lot of butter, but some butter). If you’d like, toss blue cheese crumbles on the final product. Eat. Repeat.

I’ve seen recipes where the cauliflower is roasted and drowned in the hot sauce. If find that method makes for a soggy vegetable and too much Frank’s, not enough cauliflower flavor. A good drizzle of the sauce offers a good flavor balance.

As you might surmise, I am a roasted veggie freak. My key trick to great vegetables is high heat and good surface area on the pan. Make sure this plenty of open space between each chunk of vegetable. Crowding them creates uneven roasting.

While I should probably recommend cauliflower steaks here — which would be totally awesome with the Frank’s Red Hot sauce — I’m on a huge animal protein kick right now. That means my cauliflower is going to be a side dish, not a main course.

I’ve served this cauliflower with all the major meat types, but harbor a fondness for spinach-and-goat-cheese-stuffed chicken thighs (skinless or not), roasted cauliflower, and just a small serving of quinoa or rice.