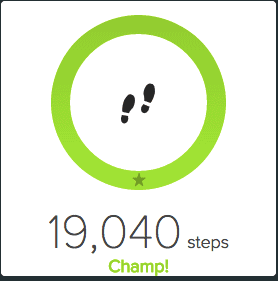 Though I didn’t realize it at the time, the worst part of my life, pre-celiac diagnosis, was the the exhaustion. I was tired all the time, and, yet, thought it was normal. Extreme fatigue after a full eight, ten, even twelve hours of sleep seemed to be my fate (and forget trying fewer hours…I was a zombie for a couple of years!).

A few weeks after I’d eliminated gluten, I realized something amazing: the fatigue was gone. It had been so much a part of my life that it took me some time to notice its absence. One day I realized I wasn’t fighting to drag myself out of bed in the morning.

This lead to a change in my life. I’m not an athlete, but I do enjoy athletics (of sorts). Or maybe it’s that I enjoy exercising — I certainly love how I feel after I’ve taken a long walk, good run/walk, or even a yoga class. And the positive influence exercise has on my stress level cannot be quantified — if I don’t take a couple breaks during the workday to get outside and walk, I find I’m a much crankier person.

I’m also one of those annoying Fitbit addicts. Oh, it started innocently enough, but I really depend on my Fitbit (I tried the Jawbone Up, and liked many of its features, but broke two, so think it’s not the right device for me). Whether I’m working at the office or at home, my Fitbit is a reminder that I need to get up and move.

My daily step goal is at least 10,000 steps. This seems like a lot — and some days, it is! — but, for me, it’s about five miles. I get my steps through walks, actual workouts, trips from my car to the office or store, or, sometimes, by pacing around the house (I ONLY do this when I’m thisclose to hitting my goal).

Like just about everything these days, fitness monitors like Fitbit come with a social component. I don’t *think* I’m a competitive person, but the week my younger sister outwalked me was a dark week indeed. I had to look into my soul and determine if I was serious about my goals and outcomes.

One other inspiration for me was a picture that was tweeted, retweeted, posted to Facebook, and even used in company seminars of our brains after a 20-minute walk. Half the image is a sedentary brain showing light activity; the other half of the image is a brain with lots of activity. I found it very inspirational, and, apparently, so did many others.

For more, check out this hilarious essay by David Sedaris. Apparently, my addiction is far more under control than his! Also, I like this article outlining 11 Creative Way to Get Your Steps In — I’ll admit to one or two of these behaviors. And here’s another look at how the 10,000 number was developed.

I set my 10,000 step goal based on vague knowledge that there was some science behind this number. And, to a degree, there is, but the overall goal is to increase your activity level. First figure out your average number of steps a day using your fitness tracker, then figure out the best ways to increase those steps (take the stairs, park further away, get up and take a walk).

I must confess that walking five miles (or more!) helps work up an appetite. And if you’re doing a lot of cardio-type exercise, you need a good amount of carbs mixed with your protein and veggies. Carbs provide energy! Lately, one of my favorite meals has been salmon with pasta. It’s fast and easy to prepare in a wide variety of ways!

For the easiest of easy, grill your salmon and toss your pasta with a jarred red sauce or pesto. If you’re an Alfredo person, it’s a quick sauce to make — just undercook your gluten-free pasta a bit because you’ll want to finish it in the sauce.