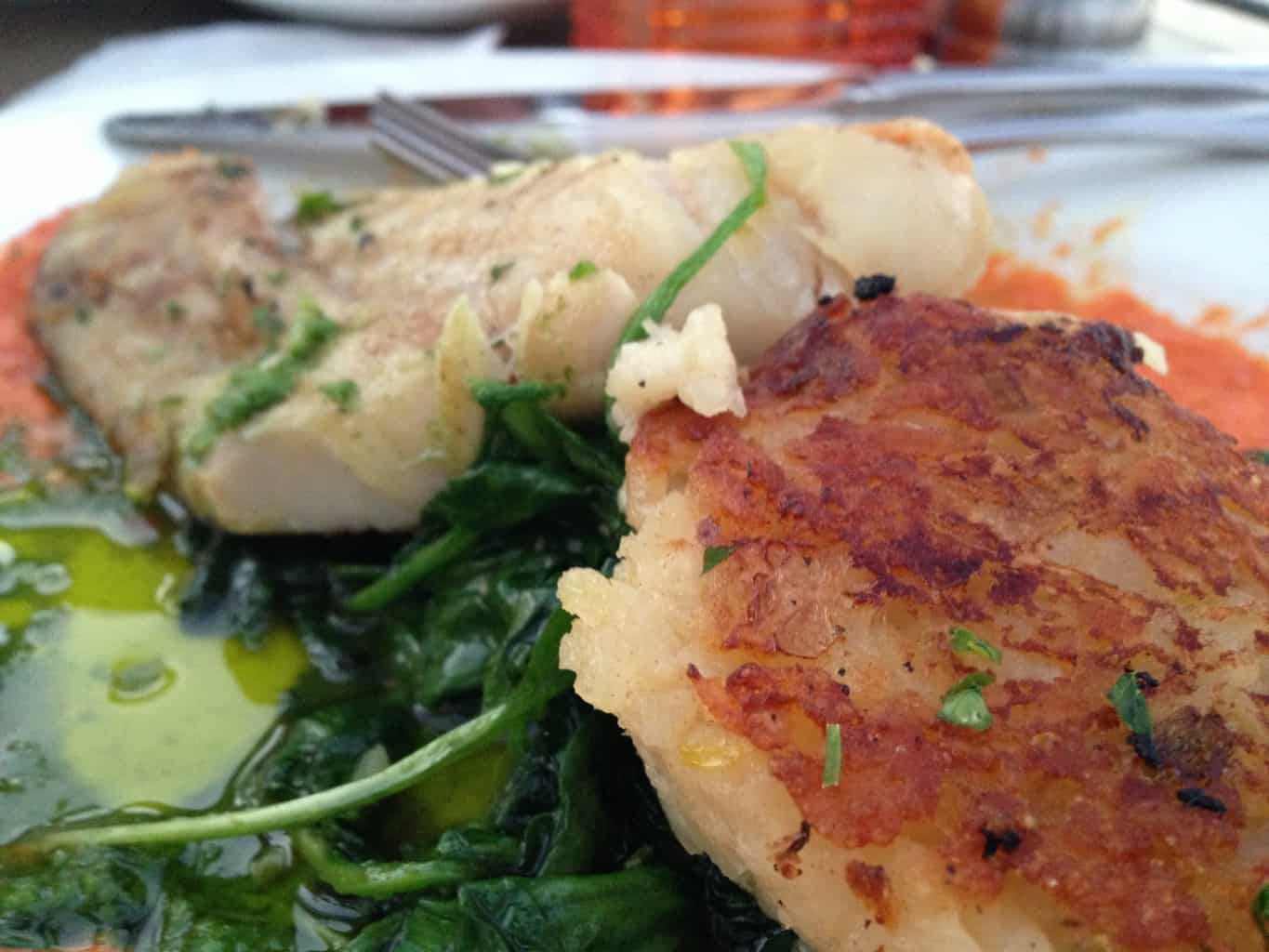 Our first trip to Catalina Island after I went gluten-free was not the stuff of legend. What with this, that, and the other, I basically lived on nachos for three days. My stomach was not amused. Neither was my waistline.

This past weekend, we went back for our usual long walks, zip lining (I’m an addict), and reading on the beach. Oh, and eating. This trip, I was determined to eat well. And while I didn’t rule out nachos, I’m proud to say I managed the four-day trip with nary a cheesy chip passing my lips.

I digress. Avalon, Catalina’s main town, is known for tourist food. By boat, it’s about an hour from Los Angeles (and the boat ride is free on your birthday!), so it’s popular with families who want to get away for a short period of time and tourists to the region. This mix of people means a lot of the food tends toward, well, gluten-filled. Pancakes are very popular.

However, if you put a bit of effort into your dining choices, you’ll discover lots of great gluten-free meals in Avalon. None of the restaurants mentioned is dedicated to gluten-free cooking, so there is a chance of cross-contamination. I am happy to say I had zero problems with anything I ate, and didn’t need to dip into the food stash I brought on the trip. With one exception that I’ll mention in a moment.

Waitstaff at the restaurants we frequented were generally sorta/kinda aware of the concept of gluten-free, and because of that, they volunteered to check with the kitchen pretty quickly when I asked my questions. It was nice to not have to prod them to do this. Very nice. Also, I suspect the awareness surrounding gluten is building on the island.

So, let’s explore some great dining options, starting with happy hour at the Pavilion Hotel. We love this hotel because it’s centrally located, reasonably priced, and, bonus!, it offers a quiet area for lounging. Near the main promenade, tables, chairs, couches, and a fire pit are set up for socializing or people watching. People watching on Catalina is like an Olympic sport.

Every afternoon, they have a free happy hour for guests. Wine and cheese are served. Being a repeat guest, I planned for this by bringing along my own crackers for the cheese. Because they were handy, I carried Schars Table Crackers in my luggage. I have to say, there is nothing more relaxing than sipping wine and nibbling on cheese and crackers. Highly recommended.

The hotel also serves a continental breakfast for guests. The usual pastries and granola plus fruit, yogurt, and boiled eggs. For a light gluten-free breakfast, there are options right there at the hotel.

Our first dinner was at the Avalon Grille. Catalina has, over the past several years, added more upscale dining. The mix of high and low is a lot of fun for me because sometimes I want cloth napkins, sometimes I don’t. The menu changes frequently and features seafood, great vegetables, and some meat dishes. We started with a tuna tartare and I had the salmon for my main course. Dessert wasn’t an option since both of us were stuffed.

The only accommodation that needed to be made for my meal was the sauce for the tartare needed to be served on the side and the wonton chips were served in a separate bowl. My husband munched happily while I, ahem, hogged the tuna.

Breakfast was at Original Jack’s Country Kitchen. This is somewhat of a tradition with us, though I no longer guiltily eat the biscuits and gravy. Instead, I stuck with the gluten-free option of corned beef hash and no toast. Depending on the day of the week and the time of day — and this holds true for most places in Avalon — there’s usually a wait to get seated. This big breakfast was needed because we did a lot of hiking that morning.

Lunch was at the Catalina Cantina. A mix of Mexican and American food populates the menu. I resigned myself to a bunless burger…then I saw Buffalo Wings (boneless and skinless version) on the menu. A bit of back and forth with the kitchen assured me these were gluten-free. These were not the greatest wings I’ve ever had, but they hit the spot. The “wings” were really mostly breast meat. Still, a fine meal before we headed out to Descanso Beach for zip lining.

(A note about the Descanso Beach Club. We didn’t eat there this trip, but I did notice they’d changed their bar menu to include a healthy, gluten-free-adaptable mezze plate.)

Post-zip lining, we headed for Bluewater Avalon. Bluewater is a mainland restaurant that took over the spot formerly occupied by our favorite breakfast place, the Busy Bee (RIP). Bluewater doesn’t serve breakfast yet, a shame since dining on the water in the morning is sublime.

We started with the Grilled Artichoke. Now, there ain’t nothing in the world better than a grilled artichoke, and I was in heaven. Things got challenging when I decided I wanted the Romano Crusted Snapper. Alas, the crust was not gluten-free. But! But! But! Our server understood I had to have the risotto cake (oh yes, did I have to have it), and they modified the snapper to be, well, not crusted.

That risotto cake was amazing. I want to deconstruct it, make it, and eat it every day. Every single day. Forever. Also, because I am a good girl, I ate all my spinach and romesco sauce.

Breakfast the next morning was at Eat at Joe’s. After a long wait, with me staring at the specials until I was brainwashed into the concept of chili cheese omelettes, I, um, ordered the chili cheese omelette. Because they make the chili in-house, it was easy enough for my server to verify it was gluten-free. Lots of cheese in the omelette. I’ve heard this place is going away, and, while it’s your basic diner food, it’s also relatively inexpensive diner food. And I do love me some good hash browns.

A side note: after going through the whole gluten-free routine, my server then asked me what kind of bread I wanted for my toast. Yeah. But it’s also funny because servers get into such a routine. I opted against the bread, natch.

Lunch, ah, lunch. This is where I give away what the husband and I believe is one of our little Catalina secrets: The Sand Trap. Located up the hill past the now-closed (except for special events and Friday night comedy) Catalina Country Club*, The Sand Trap features Mexican and American cuisine. It also features a long happy hour. Starting at two, this happy hour features one dollar tacos and cheap drinks. They are good. They are only one dollar. The table next to us ordered 16. To start.

My favorite moment on this trip was a family bicycling down from the Wrigley Memorial. As they rode past, one person shouted, “That’s it. That’s the happy hour place.” That the entire group didn’t crash was amazing.

Next time we go there, I’m going to drag myself away from the tacos long enough to ask about their arepas. These are traditionally made with just corn flour/masa harina and a savory meat filling. I am hoping The Sand Trap follows tradition. Because, well, I simply haven’t had time to make my own.

Which leaves us with our final dinner on the island. And another secret location. Okay, this is not such a secret given that we’ve never waited less than forty-five minutes for a table. I’m talking about The Lobster Trap. It’s small, it’s crowded, it’s fantastic. After two nights of fish for dinner, I was ready for steak, and the flank steak made me very happy.

We started with the seared ahi (okay, so I wasn’t *that* over fish), with the sauce on the side. Seriously, if the husband hadn’t expressed hunger and a desire for the ahi, I would have inhaled it. Instead, I had a polite little-more-than-half, as all good wives do.

The last time we ate at The Lobster Trap, three couples occupied a nearby table. They handed their day’s catch over to their server for the kitchen to prepare. First off, I never thought to do that (also, I don’t fish, so there’s that). Second off, I kept asking if it were socially acceptable for me to ask to taste what the chef prepared. In the interest of science.

And one more breakfast at Sally’s Waffle Shop. Obviously, I didn’t go for the waffles (and the husband doesn’t believe he’s ever had a waffle there). I went with the scramble with ground beef and ortega chiles. A bit bland for my taste, but it did the job. Also, I like my food spicier than the average person, so my bland may be your perfectly spiced.

A final word: in our defense, we also walked about twenty miles over the course of stay on Catalina. Probably not enough to offset the calories, but, hey, every step counts. Right?

* — The gorgeous location has the most amazing bar decor, plus an homage to the Chicago Cubs, who used to train on the island. I hope it reopens soon as it’s a great place to have a nightcap away from the madding, madding crowd.